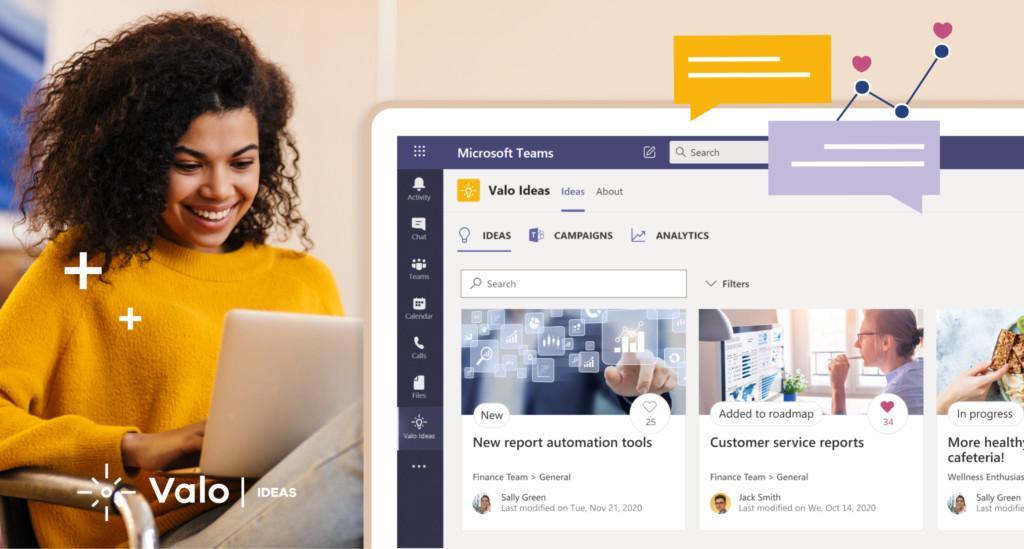 A staggering 90 per cent of executives believe that Covid will change the way they do business over the next five years, with three-quarters believing that these changes present an opportunity for growth, according to a McKinsey report.

So, how can businesses harness the ideas and opportunities for innovation that the post-Covid world presents?

Swarm intelligence-based collective decision-making is increasingly being adopted by successful businesses, as opposed to the traditional HiPPO (highest paid person in the organization) model.

Crowd-sourcing ideas is key but can become messy as ideas can get lost if there isn’t a good way to manage the ideation lifecycle.

Valo Ideas is Valo’s ideation tool, powered by Modern SharePoint and accessed via Microsoft Teams. It has been designed to allow organizations to collect, discuss, nurture, and manage ideas, resulting in a clear and transparent ideation process.

The ideation lifecycle can be split into four stages. Each stage is facilitated by Valo Ideas, creating a workflow of ideation from inception to archive.

The key to successful ideation is to write everything down, says Vivian Giang in her Fast Company article. She believes, no matter how busy you are, making time to log even the smallest grain of an idea is key to avoid it getting lost.

With Valo Ideas, employees can log draft ideas that may not yet be fully formed so they can be viewed and developed later, before sharing with colleagues.

Pro tip: With Valo Ideas, you can create draft ideas from Teams one to one chats, group chats and channels. You do not have to leave the conversation context to log an idea.

Stage two of the ideation lifecycle happens once an idea is developed enough for sharing. Employees can choose to share the idea with the whole organization, or with a specific team, for feedback.

Assets, such as documents, images and videos can also be attached to help illustrate the idea. Idea filters include categories, benefits and status to make them easy to find.

Pro tip: View published ideas from all your joined Teams in the Valo Ideas personal dashboard located in the Teams left rail.

Once the idea has been published we enter stage three of the ideation lifecycle: In progress. The new idea appears on the Valo Ideas dashboard for others to view, like and comment. Admins can also assign the idea to a specific product manager where relevant.

To develop the idea, actions can be created, including “Set up a meeting” or “Edit idea”. The status can also be changed to reflect the progression of the idea.

Valo Ideas’ handy analytics tool is great for evaluating ideas and for identifying the “ideas champions” in your business. Gamifying and rewarding the ideation process is also possible using the analytics tool e.g. awarding a gift card for “Ideator of the Month” will encourage staff to share their innovations.

Pro-tip: Use Teams channel conversations to comment on the Idea cards posted in Teams. Also get alerted about Idea status lifecycle changes by the Valo Ideas bot!

Stage four of the ideation lifecycle is the archive stage. Whether an idea has been progressed or not, once an idea reaches its intended conclusion, it can be archived.

This doesn’t mean it will be deleted, just parked for now. Who knows when it might become relevant in the future?

Pro-tip: You can also archive a whole campaign which will in turn archive all its ideas.

So, how do you manage the ideation process in your organization? Are you capitalizing on ideas and opportunities for innovation from your employees? Why not give Valo Ideas a try and empower your workforce throughout the ideation lifecycle, from inception to archive.

Get in touch and book a demo to see Valo Ideas in action. 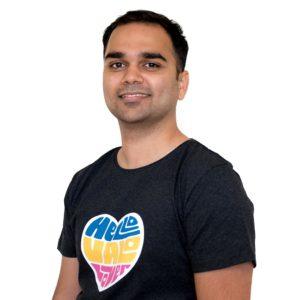 Vardhaman is a Microsoft MVP and works as a Product Owner and Lead Architect at Valo. His primary areas of focus being Microsoft 365 and Azure. He has been passionate about technology since a very early age. In his opinion, the fast-paced nature at which Enterprise Software is moving is what makes it so thrilling and exciting. He is an active participant in the Microsoft Patterns and Practices (PnP) initiative where he has spoken on various topics in the monthly community calls. In his spare time, he is an avid gamer and likes to travel to various European cities.

How to improve the UX, governance, and provisioning in SharePoint and Microsoft Teams