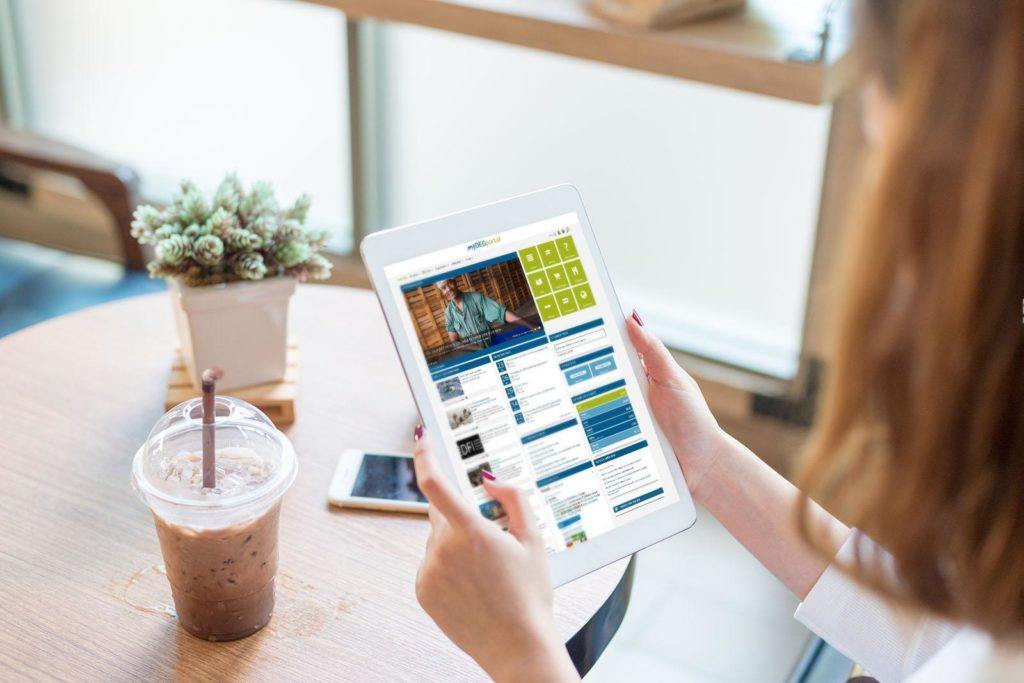 DEG wanted a new on-premises intranet solution that was user-friendly, and could act as a multilingual platform for employees to share department news, information, publications and events.

DEG, the German Development Finance Institution, a subsidiary of KfW Group, began searching for a new on-premises intranet solution because it wanted a more modern platform. The new intranet had to be located on their own server on-premises, as opposed to on the cloud.

Its former intranet, an SAP-based system, was mainly used for text and documents, but it was neither user-friendly nor visually attractive.

The organization looked for a multilingual digital workplace platform that would fit in with its IT strategy either on SAP, which it ruled out early on, or SharePoint.

During the search, DEG came across Valo Intranet on SharePoint server. The company was quickly convinced by the look of Valo Intranet and impressed with Valo Team’s effort to solve DEG’s challenges even before they became a customer.

Valo’s German Partner PointPro Solutions took DEG through a demo version, which the team instantly liked. PointPro Solutions became DEG’s delivery partner assisting with the installation and roll out of the intranet project in October 2017.

An intranet that fits with the IT strategy

DEG is one of the largest private-sector development financiers – offering financing, advice, and support to private sector enterprises. Headquartered in Cologne, Germany, DEG has offices in 19 locations worldwide with 600 employees working in Germany and abroad, operating in developing and emerging-market countries.

The organization was keen to update its on-premises intranet which did get used by its staff but wasn’t inspiring.

The internal comms team wanted to try something new so that employees had a modern and user-friendly intranet that was fun to use. The IT department was involved from the outset and supported the search for a new system.

DEG had a few stipulations for the new digital workplace. The new intranet had to be in line with its IT strategy and accommodate certain rules around data protection.

DEG wasn’t using the cloud which was one of the first challenges. Its former intranet was on-premises which certain systems didn’t support. The fact that Valo supports on-prem was a crucial factor in DEG choosing Valo.

DEG’s IT department also stipulated that it didn’t want too many different systems in-house. As the company already had SharePoint, they decided to use what they already had.

Valo Intranet, an out-of-the box product, addressed all the technical requirements that DEG needed to be fulfilled.

As DEG has offices worldwide, it looked for a solution that not only enabled them to publish content in German but could offer a multilingual element so that they could publish content easily in English too.

With around 600 employees, plus consultants and students, everyone needed access to the intranet.

Valo’s one-off license was a selling point for DEG. Instead of having to pay per user, it only had to buy one Valo license to cover all its staff making it a very cost-effective solution.

DEG initially formed an intranet steering group made up of IT, comms as well as the management team, who ultimately had to agree on it.

DEG also involved the works council, the shop floor organization representing workers, in the process. Employees from DEG’s overseas offices were also consulted, as it was important to hear their views and needs.

The steering group agreed on new governance rules for the new on-premises intranet. DEG wanted everyone in the company to be able to publish news or events that would be accessible company-wide.

As a result, each department now has their own page on the platform that they can use in any way they want. Employees can now create their own content and as a result has increased engagement.

To begin with, they thought nobody would want to publish their own content, either because they don’t have time, are not interested, or they’re scared of everyone seeing what they are publishing. But it has been very well received.

DEG has found that opening up the intranet, so that all the departments can publish content, has had a knock-on effect. Once one department started publishing and presenting itself, other departments quickly joined in and have done the same as well.

MyDEGportal is very popular. A lot of people publish their own content on their department page. One of the main reasons is because it’s very user friendly. It’s very easy to use plus it looks great.

For DEG, the intranet has been a positive way to allow departments to publicize their work. The interaction of liking or commenting on news has proved very popular and has increased staff engagement too.

A recent poll of DEG staff revealed that more than 50 per cent of employees were “satisfied” and 30 per cent were “completely satisfied” with the new intranet.

Social Media channel inside the intranet

As DEG opted to buy Valo’s Social add-on feature, its company’s Twitter feed is now visible inside the intranet, which staff really like.

This means employees that are not personally on Twitter, can now also see what DEG is publishing on this channel.

Valo Intranet has increased engagement and communication across the entire company. Content is being created not only by the internal comms team, but the workers are encouraged to publish content too.

“We usually publish posts about events or training sessions we’re offering or when we’re introducing something new or I have something exciting to share”, tells Veronika Seibt, Corporate Governance Officer at DEG, adding she really enjoys creating content for the intranet.

Even the C-suite are engaging with the intranet. They will comment or like a news items, which has increased dialogue between employees.

After using Valo Intranet for two years, DEG feels it has improved engagement and activity across the entire organization. The management board no longer sends general emails but posts important company news directly on the intranet.

One of the favorite features of the new intranet is the events and calendar pages. It means staff can see what’s going on within the company, even if they are not involved.

What I really like is that Valo Intranet is the first thing that opens up in the morning when I get to work. I’ve got all of the most important information right there in front of me. It’s a great way to keep up-to-date with what’s going on in the organization, of what different departments are doing, what events are taking place. It’s also a nice way to get to other important parts of our intranet very quickly.

For the IT team, Valo Intranet is very easy to maintain. If they need any additional help, they can call on their Valo delivery Partner PointPro Solutions, to assist them with any technical issues.

The IT team like the fact that Valo is built on SharePoint and comes with the Fresh subscription as an add-on. This means DEG can be reassured they get the latest SharePoint updates automatically with every Valo release.

Would you like a modern intranet that can be built on your current SharePoint platform? Valo Intranet can be built on-premises, on the cloud or offered as a hybrid solution. Get in touch with us to see how we can help modernize your workplace.