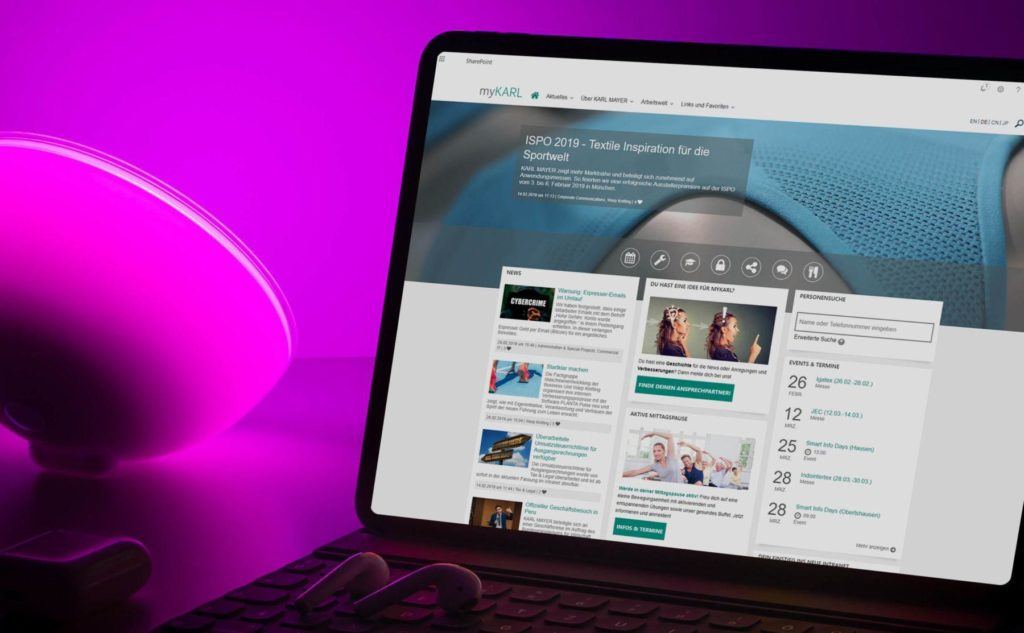 KARL MAYER, the market leading technology innovator in textile machinery building, needed a new, modern intranet to bring its global employees closer together. It wanted to give all colleagues, and every department, a place to communicate and tell their story.

KARL MAYER’s previous intranet only worked for a select few employees based at one site, in Germany. It didn’t have a platform where every employee, across its global sites, could access news and information. As a result, it created a “two-tiered knowledge system” within the organization.

In addition, as no department took ownership of the content on the intranet, information shared there became quickly out of date. Coupled with the lack of traffic, this was the beginning of the “downfall of the old intranet”.

Valo’s German-based Premium Partner, novaCapta (in which GIS AG was merged in 2021) recommended Valo Intranet because it is built on top of SharePoint. It incorporates all the Office 365 suite of tools, which makes the solution instantly intuitive and easy to use.

KARL MAYER wanted to create a digital work-space where they could reach out and communicate with every one of their employees, regardless of their location, or the language they spoke in.

The previous intranet was too exclusive. It only covered news from a few sites in Germany, accessed only by German-speaking colleagues.

This separated the headquartered staff from the rest of the world. It initiated some kind of  “two-class society” within the company, which was something that they really needed to overcome.

The corporate communications team realized the two-tiered system was a huge problem. Not only was it affecting the corporate culture, it kept important news away from a lot of target groups that they wanted to reach too.

As KARL MAYER has offices located in nine countries, including China and Japan, it was obvious the old intranet was no longer fit for purpose.

One intranet to solve three challenges

Firstly, to keep ALL employees informed about important things happening in the company. It would be used for publishing news such as strategy, change management, and store up-to-date information.

Secondly, it was to be used to make employees’ work life easier in searching and finding information they needed very quickly.

Most importantly, they wanted the intranet to help to build up a good corporate culture.

We needed a platform where colleagues could share successes, experiences, and could celebrate good things together, all over the world, without seeing each other.

From exclusive to inclusive intranet

Although English is the primary language spoken across the company, KARL MAYER recognized that each country needed their own intranet where they could publish news in their native language.

KARL MAYER knew they needed to cater not just for their managers, who work internationally, and speak good English, but for local employees in production areas in China and Japan, who don’t speak English so well, too.

Anna felt it was important that every employee and location was represented and given a platform to share their stories.

The downfall of the former intranet

The former intranet had “gone to sleep”. Only a few people updated the content regularly. This meant, for the most part, it was outdated and not very useful.

The structure of the content was not really intuitive and the search function wasn’t reliable either.

There was no chief editor, or main person responsible for the intranet; as a result, no one was nurturing it or trying to bring traffic to it.

That was the “beginning of the end of the old intranet,” Anna said.

Internal comms took charge and initiated a completely new intranet project. As they were already responsible for all other internal media, like the employee magazine, it “made sense” for them to take the lead.

After comparing different possible add-on SharePoint Online software solutions, KARL MAYER chose Valo Intranet not only because it is cost effective, it could be implemented quickly, and it solved their top-down communications challenge too.

Valo Intranet is digitally advanced, and offers an exceptional customer experience. It makes it easy for the end user to achieve what they want to do.

Anna added: “We really liked how Valo Intranet is designed to not only distribute emotional news but creates a useful platform, with quick links as well.”

Working closely with Valo, KARL MAYER and GIS AG created and implemented the new intranet named “myKARL” within six months. The project started in April 2018, and the first roll-out to the German sites were introduced in November the same year.

GIS AG’s team are currently in the process of launching the intranet in Switzerland. They will roll out to other international sites, including the USA and Italy this summer, and in China and Japan later this year.

MyKARL is currently attracting between 5,000 and 6,000 visits per week on the homepage. The communications team are happy with this result. They are continuing to promote it to encourage colleagues to “get into the habit” of checking it every morning.

[quote_card_v2 secondary_quote=”The feedback from colleagues since the launch has been really positive, with 90% of the respondents saying that the new intranet is “good” or “very good”.”]90% user approval rating

To further encourage engagement with the new intranet, the comms team have put personal and emotional content on to myKARL, in the form of news.

They report on successful projects and put a lot of pictures and content in it to catch the interest of the employees.

Another tactic they’ve used to change employee behaviour is to cut off other information channels and put them into myKARL. Staff is forced to go to the intranet to find information as the other channels are now closed.

This has been a learning process for the employees, but we’re really happy now because we can see the number of users increasing. Visits to the home page, from the first month to now, have risen by about 50%.

The introduction of myKARL has provided an additional bonus to the comms team. Before it was hard to find interesting and engaging stories to fill their employee magazine.

Since they’ve launched myKARL, and are regularly publishing success stories, people are now volunteering their own good news stories. These can now be used on the intranet or published in the magazine.

Colleagues are beginning to realize the benefits of having an intranet. They are starting to think, “How can I use this for the success of my project?”

One of the really nice things to see, as a result of being able to publish as many topics as we can in one platform, the employees now have a central platform that provides lots of solutions for their work life.

***
Are you in need of new intranet to reach all your employees? Whether you have a small or big company, we got you covered! Book a demo with us and we’ll show you how it can be achieved, fast and cost-effectively!