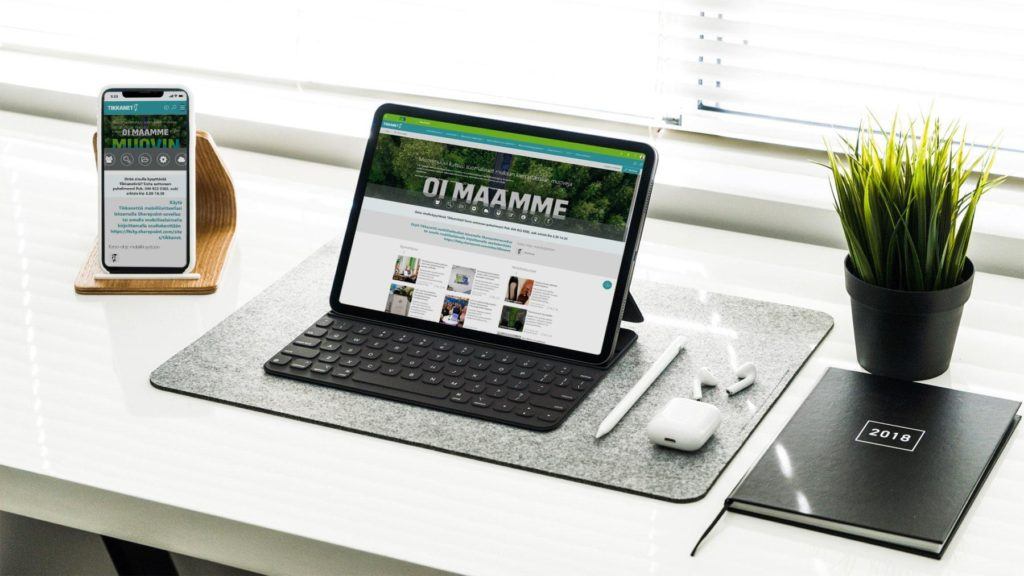 Front-line or remote workers are often unable to log into their company portal which can create a feeling of inequity within a company. This is one of the reasons that prompted Finnish service company Lassila & Tikanoja (L&T), with a vast majority of first-line workers, to start looking for a new intranet. They heard of the newly introduced modern SharePoint, with easy mobile access, and they were very interested. With the additions Valo Modern brings to the table, on top of the already great solution, they were sure it would be the last intranet they would ever need.

L&T is a Finnish company that puts the circular economy into practice. The company employs around 9 000 people in three countries, Finland, Sweden, and Russia, with the vast majority being first-line workers such as cleaners, garbage truck drivers and other maintenance workers.

L&T has an impressive history with SharePoint. Starting in 2002, they have gone through most of the SharePoint on-premises versions. Their latest intranet renewal was done with heavy customization in 2011 on top of SharePoint 2010. Now, as some processes were already moved to the cloud a few years back, it was time to take the next step – moving their intranet and making it available to every employee.

One of the reasons they wanted to renew their intranet was the need to have an information channel that all employees, no matter what their role in the company, are entitled to access. Before, it was available only to office workers and created a feeling of inequality among the front-line workers, who might rarely, or never, visit the company offices.

The solution was to find an intranet that would also be easy to access from mobile devices. With intranets built on top of on-premises, it is possible, but not easy, or even reasonable to enable.

When L&T Development Manager Heikki Tauriainen found out about the newly released modern SharePoint, he got excited – this is exactly what they were looking for!

The last intranet we’ll ever need

Modern SharePoint was added as a high priority requirement and as they started mapping out the possibilities between out-of-the-box solutions and in-a-box solutions, they ran to modern Valo Intranet and got even more excited.

When we first heard about modern SharePoint I was amazed at how mature it already was. With the ability to use it side-by-side with classic SharePoint, and the additions that modern Valo Intranet brings on top of it, I am sure this is the last intranet we’ll ever need.

But how come this big company decided to choose a solution that is still in its early days?

“We had already been working with Blue Meteorite for a long time and built trust over the years,” tells Heikki from the steps to become one of the modern Valo Intranet early adopters. “We are aware of the risks and know it’s not yet complete. However, as we were facing the renewal anyway, why choose something that is going to disappear in the future instead of choosing the future solution now? After all, modern is a lighter and more agile than classic SharePoint will ever be.”

No more months of customization and testing!

The intranet will be completely rebuilt, and only some old news will be migrated to the new intranet. The focus is strongly on the user experience and having content the employees need and want to consume.

The project has kicked off smoothly and the environment was set-up fast. Thanks to the new modern Valo Intranet releases after the launch, the product has already improved by bringing enhancements and new features such as improved search functionality.

“I am surprised how quickly our new intranet is in use compared to the old projects that took months. Now the installations and set-up were done within a few days and we could jump right into the training without the need for testing. It’s cool to move from on-premises to the cloud and be able to see the results straight away in SharePoint’s mobile app that has played a huge role in the project since day one.”

The power users are trained and ready to introduce the new environment to the rest of the employees. Now we’re at content creation stage, which the employees are now also engaged to do.  Adding more languages is also vital later on, as the background of first-line employees and their language skills vary.

“Planning the content has been the most vital topic in this renewal and now we are still working with some functionalities and learning how to publish news and target them correctly. We are now expecting the launch to happen mid-February 2019.”

We will continue following Lassila & Tikanoja’s journey with modern Valo Intranet in the future so stay tuned!

***
Are you ready to take the next step towards future digital workplaces? Explore more to see what modern Valo Intranet can offer you!