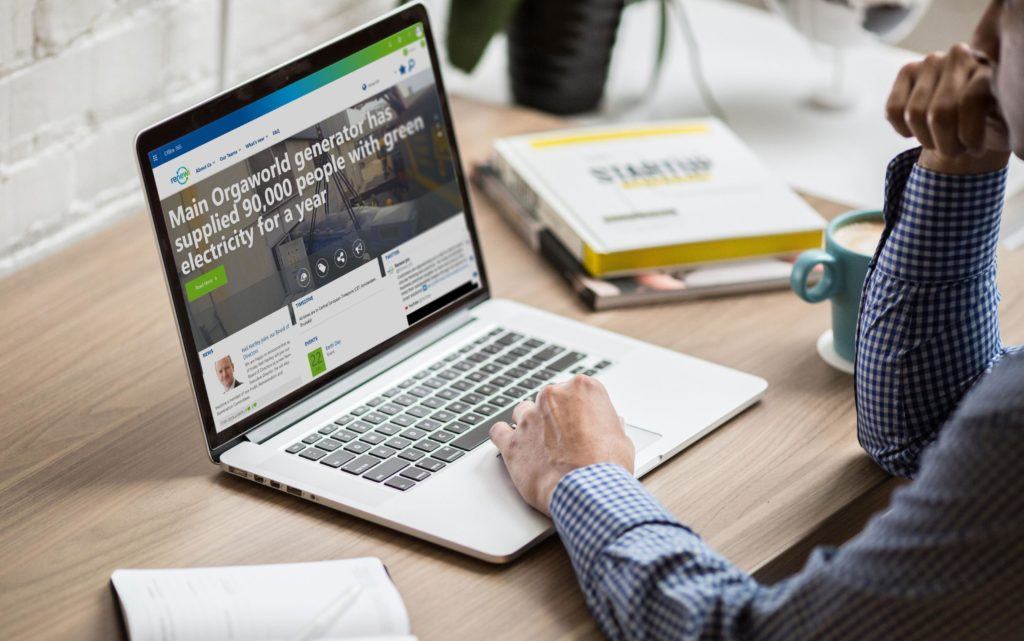 Renewi, the newly formed waste-to-product company, was looking for a multi-lingual, cloud-based intranet to unite and service the needs of its diverse workforce of more than 8,000 employees, based in 200 sites across Europe and North America.

The challenge for Renewi was to find an intranet solution that would cater for its diverse workforce, who are spread across nine countries, and speak nine different languages.

One of the important functions of the intranet was to publish relevant and informative news to reflect the needs of the audience it was servicing in their native language.

Plus, the intranet would be used to help the newly-formed company build a cohesive and supportive internal environment, to enable disparate teams from different regions to communicate and collaborate together.

Renewi, a leading waste-to-product business, was created in 2017 by the merger of Shanks Group plc and Van Gansewinkel Groep B.V.  with extensive knowledge of waste management products and services, with a geographic footprint that spans two continents it is on a mission to help create a “world without waste”.

It became clear within the first year of operation that in order to smooth the path of the post-merger integration, Renewi would need a new and modern intranet.

Renewi’s SharePoint Online Functional Application Manager, Niek Vrijsen said it was “the next logical step” to do after the merger.

The Communication department also saw this need, as its existing intranet no longer met their requirements because it was very basic, not ‘on-brand’, and only had a simple news page.

Both the Communication and the IT departments collaborated to create a Project Initiation Document (PID) to shape the nature of the future intranet platform and to jointly select a supplier.

A future-proof intranet on SharePoint

They started a selection process and entered discussions with several parties, but when Advantive showed them a Valo Intranet demo, highlighting its extensive features, they were sold.

The communications team were particularly keen to have an interactive element incorporated within the intranet, that would encourage all employees to get involved in company life. It had to be a digital environment that employees would like to visit.

We felt it was important that the new intranet would not only be used for posting news, but also a space where employees could engage and interact with the content too.

Tailored to each country with relevant local news

As a first step, Renewi conducted an employee survey to find out what staff wanted from their intranet.

The next challenge was to determine the structure for the new intranet, which had to cater for nine different business languages, across nine countries.

In addition, the news had to be tailored for the different Renewi divisions, and available in the desired languages.

It was important for employees that the intranet displayed local news from their own division, and in their preferred language.

On-brand in every country

“The next step was to ensure that the new intranet was fully ‘Renewified’ as brand experience is very important to the company” said Alex. The new intranet needed to look and feel like the Renewi brand.

The Advantive consultants trained Renewi’s team on how to get the best use of Valo Intranet, which gave them a “jump start”.

Renewi now has a fully adapted branded portal, based on SharePoint, which allows employees to share information, communicate and update social media, via their desktop or on mobile, in their native language.

News publishing, blogging, templates, alerts, and events are just some of the features now available to staff at the touch of a button.

Working life after the merger

Post-merger, the newly-branded intranet has formed an important part of Renewi’s company identity.

It has provided continuity and created unity for diverse and disparate teams, who are now able to communicate and collaborate easily.

Valo Intranet’s multi-lingual solution now enables each country to provide news and insights in the language spoken by its employees.

We have been immediately impressed with the performance and functionality provided by the new Valo Intranet. It is so interactive and looks beautiful. We are very happy with it.

The importance of cross-departmental collaboration

Alex puts the success of the smooth implementation of the intranet down to cross-departmental collaboration and team work.

This was an ICT and Communication Department initiative. This cross-fertilization provided us with an attractive, user-friendly and future-proof intranet platform. Thanks to the Advantive consultants’ knowledge and positive-critical attitude, we now have a modern and future-proof intranet platform that will serve Renewi’s colleagues for years to come.

Interested in seeing how fast and easy content creation can be with our multi-lingual feature? Book a Valo demo with us and we’ll show you!