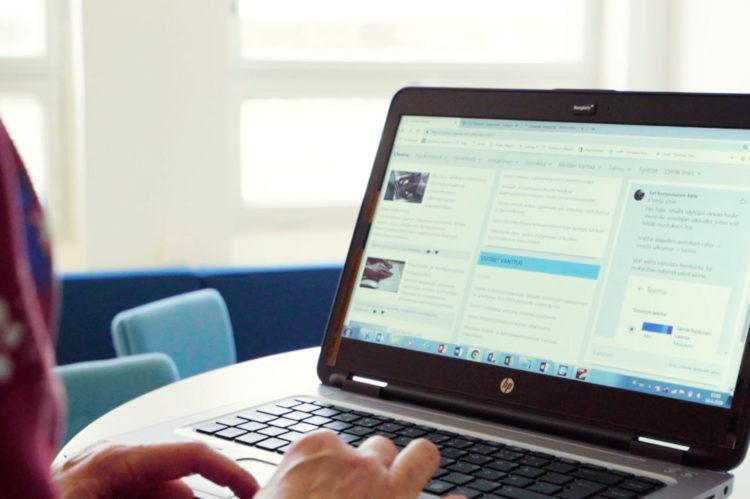 The City Council of Vantaa was in need of a new intranet that would enhance the use of Office 365 and build a new home for existing cloud services.

Starting Point:
The City Council of Vantaa, a Finnish city and municipality, wanted a new, modern intranet to move into the digital age, enabling better communication between users. It was important that staff were able to share and receive information in a more accessible and relevant way.

As the organization was already using Office 365 (O365),  any new intranet had to fit into their existing cloud. However, one of the main issues with the previous system was that not everyone had discovered O365’s suite of tools so they weren’t being utilized to their full potential.

Having identified this problem, the team began searching for a new intranet platform that could enhance the use of the current O365 suite of tools.

Valo parent company, Blue Meteorite, were on hand to assist with the installation of Valo Intranet.

This also involved implementing and rolling out the new system, a process that took very little time from Blue Meteorite’s initial involvement in October 2018 to the new intranet being launched in January 2019.

A platform to enhance the current Office 365 environment

The City Council of Vantaa was in need of a new intranet that would enhance the use of O365 and build a new home for existing cloud services.

The team wanted a platform that was more user-friendly to enable staff to communicate with each other in a modern digital workplace. As they were currently using O365, it was important that the new intranet supported this environment. Valo Intranet stood out amongst its competitors due to its customizable features.

The new intranet also needed to be a good fit for the modern workplace, to enable working in a more flexible way and from different locations.

The City Council of Vantaa’s existing cloud environment wasn’t working properly as staff didn’t know how to use the available tools, mainly because they weren’t always visible. Now, because of the intuitive nature of Valo Intranet, these tools are more obvious to employees and easier to use.

Sharing relevant information is much easier

Valo Intranet’s user-friendly platform allows staff across the city to share news and day-to-day information clearly in the main navigation, while industry-specific news is provided based on the user’s ID.

Users are able to form a much more comprehensive view of what is going on in the city.

Valo Intranet has brought the city into the digital environment, enabling staff to share and receive information and get a clearer picture of what is happening in the city.

Internal communications have been transformed

The installation of Valo Intranet has improved communications significantly, transforming the city’s internal communications entirely. Publishing news is now much easier than before with Valo’s accurate, clear and rational structure.

The new intranet has pretty much changed our internal communication. Now publishing news is much easier than before. Information is clearly and intelligently structured.

Searching the cloud has become so much easier and faster

Perhaps one of the most important features of Valo Intranet for the City of Vantaa is its sophisticated search function. The city’s cloud environment is huge, so being able to search everything included in it accurately makes life much easier all round.

Feedback from staff has been incredibly positive, especially with regard to Valo Intranet’s ease of use. The new intranet platform is a big step forward on the journey into the digital era for the City of Vantaa who are hugely motivated about embracing all that the cloud has to offer for a 21st century workplace.

The customer case was originally published on meteoriiitti.com

In today’s fast-paced world, companies continue to look for new ways and tools to keep up with their b...