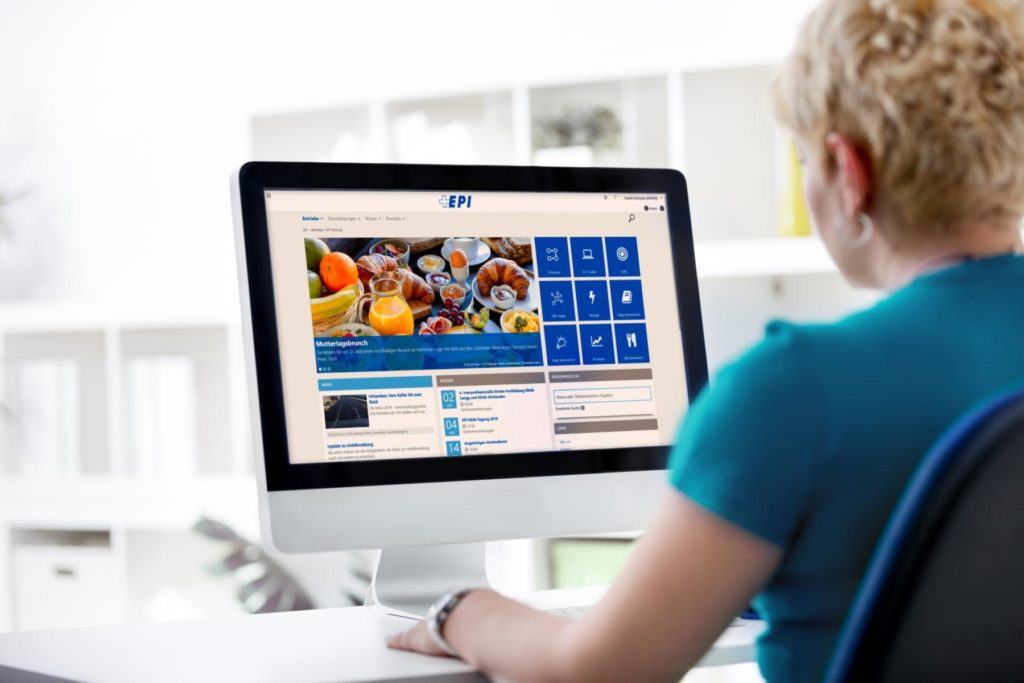 The Swiss Epilepsy Foundation, a Swiss non-profit organization, was looking for a new user-friendly intranet to connect its workforce in Zurich. It wanted its teams, spread across its large campus, to be able to share content and news, as well as feel like they are part of a unified organization.

The Swiss Epilepsy Foundation was searching for a new intranet solution that would unite teams who work for six companies based on one large campus.

It had previously tried using an intranet platform built on SharePoint that the ICT team had set up, but quickly realized that one major obstacle was its lack of visual appeal. The former platform housed nothing more than documents and was lacking any design, so staff weren’t using it.

Having identified this problem, the Foundation’s ICT team began their search for a visually-appealing and more user-friendly interface. They didn’t want to build or construct something themselves, preferring to buy or rent an existing solution.

Swiss-based Valo Premium Partner, Beetroot AG, helped with the installation of Valo Intranet. This involved implementing and rolling out the solution with video tutorials for staff. Their expertise in this field meant Beetroot AG were able to quickly answer any questions that arose from the Foundation’s marketing and communications teams.

The Swiss Epilepsy Foundation is a non-profit organization based across a large campus in Zurich, Switzerland. The Foundation has expanded to 1,000 staff who work in six companies on the campus.

The Foundation’s ICT department, headed up by Thomas Haug, was looking for a new intranet platform to replace their current system that wasn’t working.

The team wanted a platform that was more visually-appealing to create a modern digital workplace that would enable staff to communicate with each other in a more intuitive way.

The ICT team had already tried to set up something themselves, based on the SharePoint platform, Microsoft Online, but soon realized that what they actually needed wasn’t just IT-focused; design and visuals were just as important too.

This is why Thomas and his team set out to find a product or company that could offer a great technical solution but also had a user-friendly interface as well.

As The Swiss Epilepsy Foundation didn’t want to build, construct or programme something themselves, their ICT team began looking into out-of-the-box intranet solutions.

Through internet searches the team came across four or five vendors, from which Valo was the marketing and communication teams’ clear favorite.

They all agreed that Valo’s solution, built on SharePoint, was not just user-friendly intranet, it had the add-ons they needed too.

As the Foundation is a non-profit, it was important that the ICT team kept costs to a minimum. Having recently been named ClearBox’s best value intranet-in-a-box solution for the second year in a row, Valo was an obvious choice.

We really liked the design and structure and idea behind Valo, as well as the pricing structure. Valo was very helpful by saying ‘for non-profit organizations, we have a special discount’. So, we really liked how Valo acted and reacted.

Because the companies under the Foundation are different sizes, they are able to use the Valo Intranet to suit their own purpose.

We’ve had great feedback from the users. They really love it. They now know that the relevant news and information is now found on Valo Intranet. So, I think adoption will grow pretty fast.

A smooth process from start to finish

From deciding to go with Valo Intranet, the entire project took about six months. However, Thomas Haug stresses that the process could have been much quicker, but they were not in a hurry and were keen to take their time.

The whole process ran incredibly smoothly thanks to the expertize of Beetroot AG, who are very familiar with the product and were very helpful at each stage.

Working alongside the Foundation’s communications and marketing teams, Beetroot AG implemented and rolled out the solution. Plus, they were on hand to answer all the questions that arose throughout the project.

A corporate identity for each of the Foundation’s six companies

As the Foundation is the umbrella organization for the six companies on the campus, it was important to have an identical look and feel across the board to give it more of a corporate identity.

One of the many benefits of Valo is that it is customizable, so although a corporate identity was needed, it also allowed for small adaptations for each company working for the Foundation or inside the Foundation. The clinic has its own logo and there are different news feeds for the different companies, but in essence, the look and feel is the same.

Now that the first phase is done, the Foundation is looking at ways to encourage collaboration and to engage co-workers. As for the next steps, the ICT team is looking at adopting additional Valo features, including Valo Teamwork and Valo Idea Management tools.

Are you struggling to engage your employees to use your intranet? Switch to Valo Intranet. With three visual user interface to choose from your intranet could be more visual and intuitive to use in no time. To see yourself, book a demo and we’ll take you to a quick tour.